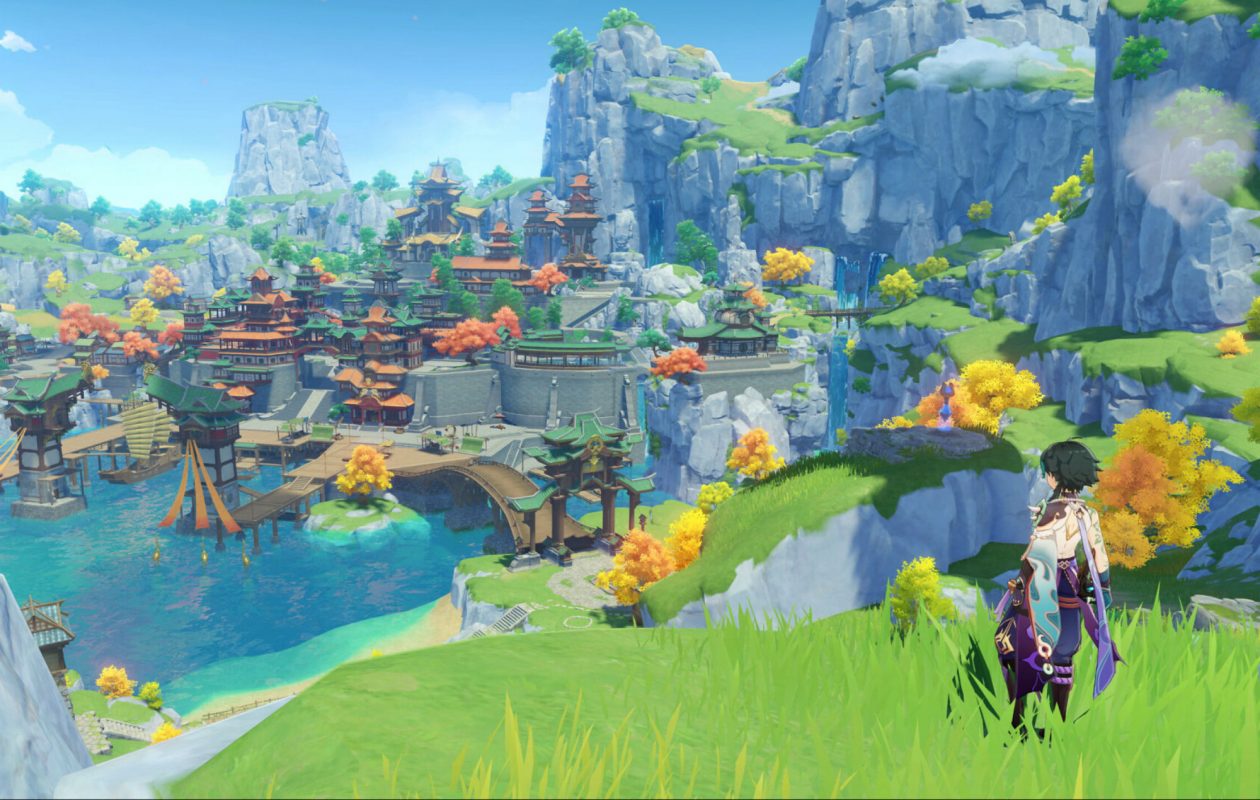 Do you want to know the best strategy when it comes to getting the characters in Genshin Impact as a beginner?

In this article, I will explain exactly how the Gacha system works in Genshin Impact and will show you the strategies when it comes to getting the characters that you want.

I was scratching my head at first trying to understand exactly how the Gacha system works in Genshin Impact.

With the plethora of launch rewards being given out early on in the levelling process, I want to share you how I developed my strategy and how we’ll be using those resources.

Please be sure to like subscribe on my YouTube channel and let me know down in the comments what character you want the most in Genshin Impact.

You can also check me out live on my Twitch where I will be playing Genshin Impact at launch. 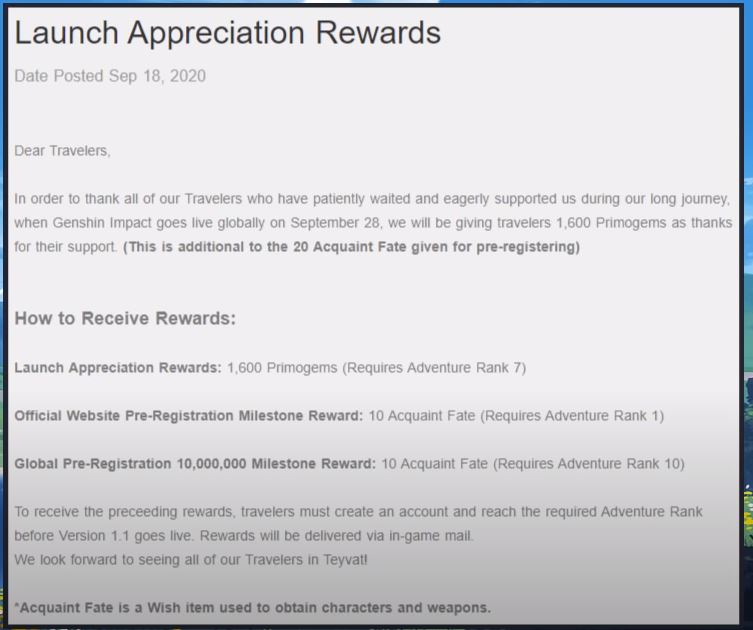 Before we get into explaining exactly how the Gacha system works, first let us talk about the launch appreciation rewards at the launch of Genshin Impact.

Everyone will be receiving 1,600 primo gems and 20 Acquaint fates at varying intervals during the adventure rank levelling process, up to level 10.

It should take no longer than two hours to receive all of these launch rewards and having the knowledge of how the Gacha system works will enable you to spin these resources wisely.

What is the Gacha system in Genshin Impact?

The first thing to establish is that there are two types of Gacha currencies known as Acquaint fates and Intertwined fates, which can be used for wishing for characters and weapons. 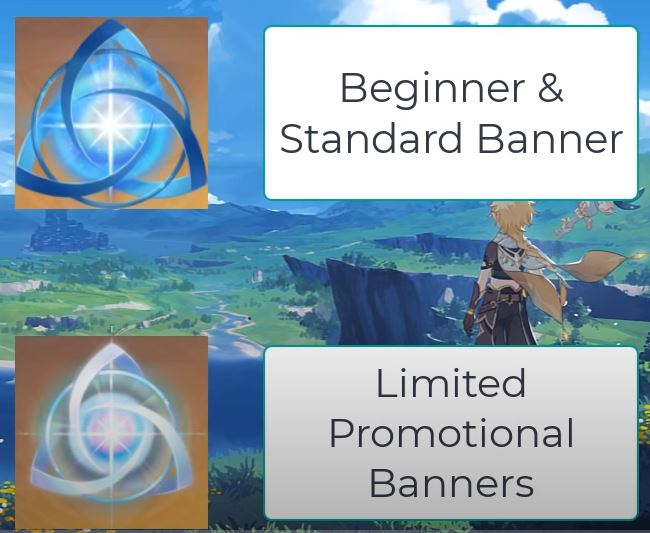 There are multiple ways to acquire these fates in game, however for free to play players, these summoning resources are somewhat sparse but for those willing to pay even a little bit, it can make a huge impact on your summoning resources.

The paid currency in Genshin Impact is known as Genesis crystals which can be transformed into prima gems to buy Acquaint and Intertwined fates.

You can buy either of these fates for 160 primo gems each. I will say that there are multiple other sources for these fates which you’ll get through your adventures. But I will not be going into detail for farming those as I want to keep this article focused on how the Gacha system actually works.

Let’s talk about the most important thing when it comes to any Gacha system, the pooling rates.

These rates can be seen as abysmally low, but there is a safeguard in place known as the pity system to help combat such low pulling chances. The pity system will reward a guaranteed item of a certain rarity once a certain amount of pools are done.

These differ slightly depending on the banner type that you pull on. When it comes to the 4 star pity, you are guaranteed a 4 star or above every 10th wish, if you have not pulled one.

Now when it comes to the 5-star pity, there is a guaranteed 5 star every 90th wish if you have not pulled one. If there is a promotional 5 star on a banner than there is a 50 chance on the first 5 five-star item being the promotional character.

This resets on successfully pulling the promotional five-star character.

Now I do believe if you want to fully understand the pity system, you must also understand how the different banner types work as stated earlier, there are multiple banner types which use either Acquaint or Intertwined fates.

Not all banners will have featured 4 star or promotional 5 star characters. The beginner banner is the one that pretty much everyone is going to be pulling on. It is a banner for new players which can be wished on for a 20 reduced amount of Acquaint fates.

A maximum of 20 wishes can be performed on this banner, however, unlike other banners you can only receive characters from. This specific banner this banner in my opinion is a must pull on starting out in the game. As the other Acquaint fate, the standard banner has a higher chance to receive weapons on than characters.

The standard banner is a non-limited time banner possessing all of these starting five-star and four-star characters and weapons in it. Like the beginner banner, this one also uses Acquaint fate for wishes. The most important thing to note, is there is a higher chance of pulling weapons from the standard banner, as there are more 5 star and 4 star weapons than characters in the summoning pool.

For example, there are 5 of 5 star characters and 10 of 5 star weapons in the standard banner. It means, two thirds of the 5 stars pulled will be weapons paired with the abysmal 0.6% pulling rate.

Limited promotional banners work very differently than the beginner banner or the standard wish banner. They will use intertwined fates rather than Acquaint fates as their wishing resource. While the pulling rates of 4 star or 5 star items do not change. There is a drastically higher chance of pulling the promotional or featured characters that you are after.

This is due to the featured 4 star pity and promotional 5 star pity system that we talked about earlier.

Lastly, there is the limited weapons banner this banner is similar to the limited promotional banner, except no characters are present on the banner and the 4 star and 5 star pulling rates are slightly higher. This banner will also use intertwined fates rather than acquaint fates as your wishing resource.  I’m not going to speak heavily about the weapons Gacha but this banner should not be overlooked as weapons can make a huge impact on your power stats.

Now that you know how the Gacha system works let’s talk about some starting strategies that you can implement for the people that are free to play or for people that are willing to spend just a little bit.

In summary, here are the strategies if you want to play free to play on Genshin Impact:

Do Not Reroll in Genshin Impact

Now for the free to play strategy , do not reroll in this game as the rural process is quite tedious and you may get banned since the developers (miHoYo) are watching.

You will want to use all of your starting Acquaint fate on the 20 times wishes for the beginner banner, which will reward a guaranteed character.

Use the rest of Acquaint Fate on Standard Banner

Next, you’ll want to wait specifically for limited promotional banners with four-star featured characters or dupes that you want. You want to buy an Intertwined fates with Primo gems to pool for those 4 star characters. It is highly unlikely for you ever to max out a 5 star characters constellation as a free-to-play player.

So my advice is to just not pull for 5 stars characters at all. However, four star characters are extremely unique and can be just as good. To manage your resources as a free-to-play player, you can use primo gems either way. It’s the energy system that’s required to continue progressing in the game. You can also buy additional fates to use in the Gacha.

No more than 3 times Resin restores

Figuring out a balance between restoring original resin or buying wishes will just depend on you. I do recommend though, that you never go past three resin restorations. As the cost becomes quite expensive taking almost a full summit or more beyond three resin restores .

Now for those “dolphins” out there, those people willing to spend a little bit, I have a little bit of a different strategy for you.

Like the free to play strategy, you’ll want to use all of your starting Acquaint Fate on the 20 time wishes for the beginner banner which will reward you a guaranteed noel. Use the rest of your required Acquaint fates on the standard banner immediately.

When it comes to your Original Resin it really just depends on your budget, so just kind of restore it as you please. The official prices are not out on genesis crystals, so keep an eye out on this strategy.

The game does appear to be very stingy with your free to play resources. But guess what? Paid resources are quite a bit more bountiful.

For the last strategy, we have the whale strategy to talk about. What is a whale, you may ask? Well, someone who spends with a lot cash. Kaching!

And in this strategy you just do whatever the hell you want because you’re a whale dude. You don’t need to watch this video for that. Just make money, spend money every day you know.  I don’t know. Good luck.

I hope you now know exactly how the Gacha system works in Genshin Impact. This system took me quite a long time to fully wrap my head around but I hope that I could have at least brought you a little bit of clarity today. Please be sure to comment down below. I’d love to hear your thoughts. 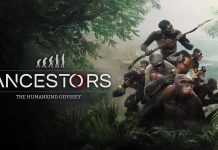